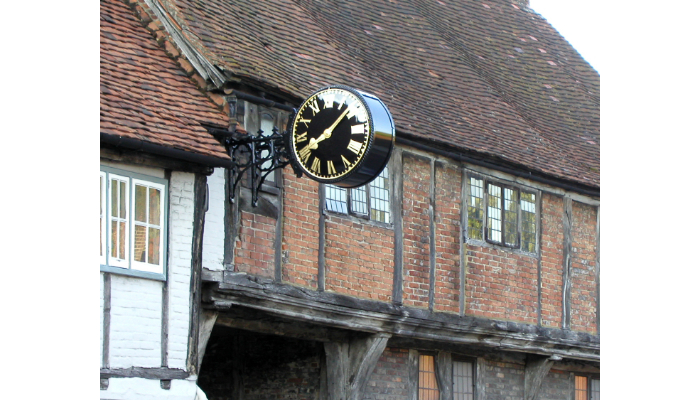 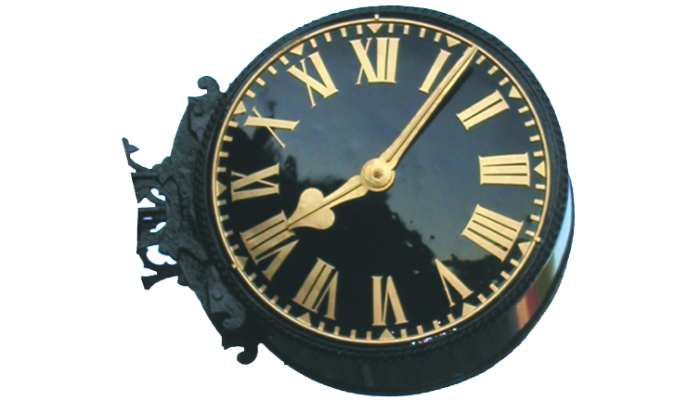 The exact date of the clock is not known, however the bell is dated 1668.

The clock movement can be seen inside the building, with the dials mounted outside, overhanging the High Street.

We know from historical records that a man called William Ayers wound the clock daily in 1697 and the tradition was continued up to the present day until its
renovation in 2003, when an automatic winding system was installed.

The history of the clock has been difficult to research, but the birdcage frame with knobs is typical of a clock of the mid 17th century. It strikes on a bell dated 1668 which would support the theory, but there is no actual proof that the clock dates from then. However there is a record of payment to a William Ayres in 1697 for ‘looking to ye clock’. Originally the clock had square wooden dials, probably with only hour hands. These dials were replaced by the present copper dials in a cylindrical iron case along with some gearing in the clock movement to the hands in 1861.

The original anchor escapement survived until the early 1940’s when it was scrapped during repairs, which were carried out with a total disregard for the very great historical importance of the clock.

In 1961, the clock became unreliable in the going and striking trains. The dial casing was in a dangerous, disintegrating state, it had to be taken down and completely rebuilt. At the same time the dials were sent for restoration. Repairs were carried out to the going train but the striking train had to be left silent until further work was carried out.

On 13th July 1999 the clock bell could be heard again striking on the hour. The bell has been rehung on its original elm headstock using the original ironwork.

Peter Harris, a resident of West Wycombe, who had lovingly carried out all the repairs and wound the clock since 1950 and was in the process of arranging to have the dials regilded, died in 2000. It was felt that a fitting tribute and memorial to his dedication would be to continue with the work and to have an automatic winding system fitted.

A small committee was formed and fund raising events were organised. In 2001 experts and clock makers were invited to evaluate the clock and to advise on the renovation work required. After the initial amount of money had been raised a grant was awarded by the Heritage Lottery Fund to carry out the work which was completed in 2001.

Gillett and Johnston were selected to carry out the project. This company have been clockmakers since 1844 and have carried out many restoration, renovation and creation projects.

Gillett and Johnston have worked on such famous clocks as ‘The George and Dragon’ automation clock on Liberty’s of London, Hampton Court, Windsor Castle, Kensington Palace, Royal Courts of Justice, Eton College, St James’s Palace and the Shell-Mex Building as well as lesser known clocks such as The Town Hall in the Falklands, the Port Said Lighthouse, the Oval Cricket Ground and many others around the world.